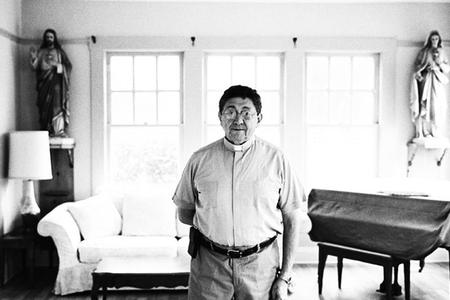 Photo credit: Peter Briggs
07/23/2015
This month, Father Rafael Antonio de Avila y Romero began a six-year post at Sacred Heart Church in Olema. He is the church’s first Mexican pastor in its more-than 100-year history, and he joins a community where over half of school-aged children are Latino.
Soft-spoken, though conveying an intense conviction, Father Rafael was born in Aguascalientes in 1946, the second of four siblings. A self-described “city person,” he was inspired to lead a religious life by a priest who was a dear friend of the family.
“He was a really nice guy,” said Father Rafael on Monday, speaking from his office in the church’s Old Rectory. “I liked what he was doing, and I wanted to be like him.”
At 12 years old, his father died, and Rafael Antonio enrolled in the minor seminary of Misioneros de Guadalupe, on the outskirts of Guadalajara. He remained there for five years before attending a major seminary at the University of Mexico, in Mexico City, where he studied philosophy and theology.
At 21, he left Mexico to study in Rome. There, he learned French and Italian, earned a master’s degree in spirituality and was ordained in 1974. He returned to Mexico City that year, and for several years after taught at the seminary where he had been a student.
Then, in 1980, Cardinal Agnelo Rossi sent Father Rafael to Jerusalem, where he was placed in charge of a “Biblical house” that was under the supervision of Rome’s Propaganda Fide—an organization founded in 1622 to oversee the Catholic Church’s missionary activities throughout the world. He taught theology and language to missionary priests coming to Jerusalem from Africa and Asia until 1982.
That year, on Easter Sunday, an American-born Israeli soldier opened fire inside Al-Aqsa Mosque, one of Islam’s holiest shrines, killing two Palestinians and sparking violent protests that lasted for many weeks.
“Many people were killed,” Father Rafael said. “It was not very safe to live there.” The Propaganda Fide decided to close the center.
Father Rafael again returned to Mexico City. He served for three years as dean of the city’s Universidad Intercontinental before his supervisor at Misioneros de Guadalupe sent him to Hong Kong, where he lived from 1985 to 1993 and learned Cantonese.
Since then, he has earned a master’s in counseling at Santa Clara University, spent two years serving in a Los Angeles parish and worked with Chinese speakers through the Archdiocese in San Francisco. Most recently, he served at St. Veronica Parish in South San Francisco. Then he received a call from the city’s bishop, Salvatore Cordileone, asking him to go to Olema.
“It’s a very beautiful area, really,” he said of the hamlet. “It’s very peaceful. People are nicer here than in my previous parishes.”
At Sacred Heart, Father Rafael succeeds two pastors, Honesto Gile and Manuel Igrobay, who served two-year stints. Before them, pastor Jack O’Neill served from 2002 to 2011. Many members of the Sacred Heart congregation have praised the work done by the parish’s former pastors and are eager to see how their new leader will contribute to West Marin.
“People have been happy to know that he’s here to stay for six years, minimum,” said Ismael Gutierrez, a Point Reyes Station resident who has attended the church for 24 years. “He came with a lot of energy to bring people together—Latinos and Anglos. He has a lot of ideas he wants to put together to get the community excited.”
Since holding his first mass on July 1, Father Rafael has been seeing around 50 people come for English mass on Sunday mornings, and a similar number for Saturday night Spanish mass (unless someone’s having a party and far fewer people show up, which he said “is understandable”).
For his part, Father Rafael hopes he will help fulfill both the spiritual and social needs of his parish and, along the way, inspire them through deeds that express his faith.
“What is my purpose?” he asked. “To make this community stronger. To reach their hearts, by being a human being.”
Before officially becoming a parish in West Marin in 1940, Sacred Heart Church and the neighboring Old Rectory long served as a resting place for missionaries working on a leper colony in Molokai, in Hawaii.
For many years, the church in Olema stood alongside a second church in Point Reyes, before the Olema church was decommissioned in 1923. Services were held in the Point Reyes church until 1987, when it was decommissioned and sold to the Dance Palace. Today’s Sacred Heart Church in Olema was dedicated in 1968.
Mass at Sacred Heart takes place in English at 9 a.m. on Wednesdays and at 8:30 a.m. on Sundays. A Spanish mass takes place at 7 p.m. on Saturdays.

Newspaper articles on the healing ministry